States With the Worst Drunk Driving Problems in 2022

Since the 1980s, drunk driving has become less and less common in the United States, a trend reflected in a persistent drop in overall DUI arrests and fatalities over time. During this period, enforcement of DUI laws has grown more strict, which makes these statistical improvements more remarkable. 2019–the latest year for which complete FBI arrest statistics are available–was no exception, and at least half of U.S. states witnessed a reduction in their DUI arrest rates.

Many attribute this continued reduction in drunk driving to decades of successful awareness-raising campaigns by non-profit groups such as Mothers Against Drunk Driving (MADD), which claims to have saved around 350,000 lives through their advocacy work. Another factor is the increasing popularity of ridesharing apps like Uber and Lyft, which make getting a lift home from a night out easier than ever before, although studies on these services’’ direct effect on lowering the prevalence of drunk driving remain less-than-conclusive.

Despite these reasons to be optimistic, drunk driving has not yet become a thing of the past–not by a long shot–with the nation tallying over 1 million DUI arrests in 2019, according to FBI data. As with many types of crime, driving under the influence is much more prevalent in some regions compared to others.

In order to give a complete picture of drunk driving in America, we’ve ranked U.S. states according to the severity of their DUI problem. We produced ranking by giving each state a DUI severity score based on the latest FBI crime statistics, National Highway Traffic Safety Administration DUI fatality statistics, and U.S. Census Bureau data. 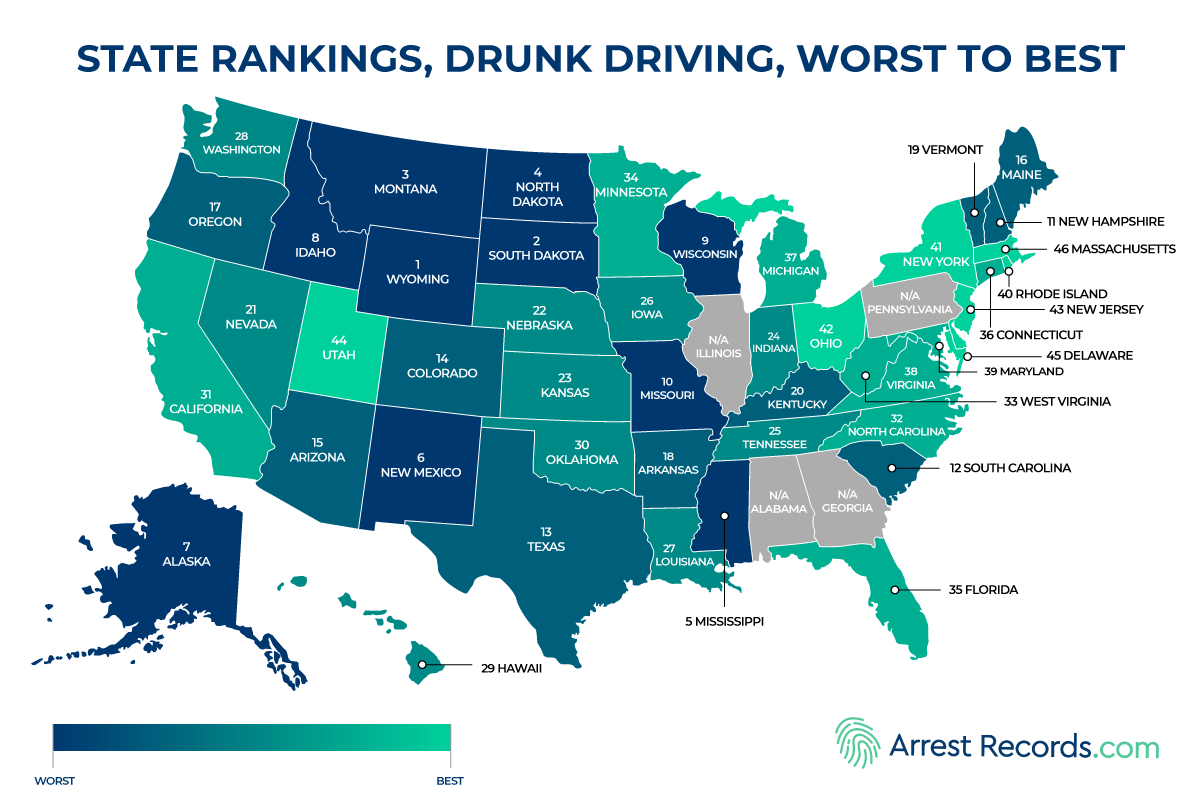 The states with the biggest drunk driving issues

Wyoming — the state which topped our 2019 DUI ranking–once again earns the dishonorable distinction of being the worst state for drunk driving in the United States in 2020. The Cowboy State garnered its position due to a high DUI fatality rate and the 3rd highest DUI arrest rate in the country. Long distances between nightlife spots and homes, as well as the state’s reputation for rugged independence, may have something to do with the high tendency for drunk driving in the state.

However, there are signs to be optimistic: Wyoming’s DUI arrest rate dropped nearly 8% between 2018 and 2019, and DUI fatalities have steadily decreased over the past decade, as well. Additionally, despite having a high DUI fatality rate, the state only had 34 such fatalities in 2018, placing it in the bottom six states in total DUI fatalities. However, the state’s low population accounts for its high rate.

Interestingly, the states in the 2nd to 6th spots (South Dakota, Montana, North Dakota, Mississippi, New Mexico) all retained their positions from the previous year, as well. Like Wyoming, these states are all plagued by high DUI arrest rates and high DUI fatality rates. Yet–as with Wyoming–each of these states witnessed a reduction in their DUI arrest rates over the previous year. New Mexico in particular showed a marked reduction in DUI arrests of about 33%.

The states where drunk driving is of least concern

As with the states at the top of the list, the five states with the least severe drunk driving problems–Massachusetts (#46), Delaware (#45), Utah (#44), New Jersey (#43), and Ohio (#42) –all more or less retained their spots from the previous year.

The position of many Northeastern states near the bottom of the list (New York and Rhode Island are not far behind) suggests that drunk driving is not a major issue in this region compared to in other parts of the country, such as the West and Northwest. However, Massachusetts, Delaware, and New Jersey all experienced an increase in their DUI arrest rates from 2018 to 2019.

Utah, the state with the 3rd least serious drunk driving problem according to our ranking, is an interesting anomaly: nearby states such as Idaho, Wyoming, and Montana are much closer to the top of the list, yet the Beehive State is in the bottom ten in both DUI fatality rate and DUI arrest rate. The state’s position can be better understood–if not explained, outright–by a couple of factors: Mormonism, Utah’s predominant religion, bars consumption of alcoholic beverages, while the sale and distribution of alcohol are heavily regulated in the state.

Where has drunk driving gotten worse?

A fair number of states jumped up in our rankings from 2019 to 2020, although several of these jumps can be disregarded due to the fact that there are only 46 states in the ranking this year (Illinois, Pennsylvania, Georgia, and Alabama all reported insufficient arrest data to be included).

Most notably, Missouri jumped up 22 spots from #32 to #10, owing to a significant 68% increase in DUI arrest rate over the previous year. Idaho (up 11 spots) and Louisiana (up 7 spots) went up considerably in the ranking from 2019 to 2020, as both states experienced double-digit percentage increases in DUI arrest rate.

Which states have shown improvement in regards to drunk driving?

As previously mentioned, at least half of U.S. states experienced a reduction in DUI arrest rate between 2018 and 2019. Most notably, seven states achieved remarkable double-digit percentage drops in their DUI arrests for the year (two additional states–Georgia and Alabama–also reported double-digit percentage drops, although their crime data reporting represented a small fraction of their populations).

Of these states, North Carolina experienced the most significant improvement, with a near 69% year-over-year reduction in DUI arrest rate. This allowed the Tar Heel State to go down 25 spots, from 7th to 32nd, in our ranking of the worst states for drunk driving. North Carolina’s reduction in DUI arrests is so significant that it raises the question as to whether its 2019 drunk driving arrests were underreported to the FBI, although there is no evidence for this.

The state’s neighbor, South Carolina, earned the second greatest reduction in DUI arrest rates between 2018 and 2019 (a 48% drop), which allowed it to drop from 8th to 12th in the overall ranking.

With a couple of notable exceptions, the 2020 ranking of states by their drunk driving problems closely resembles the previous year’s ranking: most states retain a similar position on the list compared to 2019.

Zooming out and looking at entire regions, the north-central block of Wyoming, Montana, and the Dakotas is still the worst part of the U.S. for drunk driving, characterized by high DUI arrest rates and a high number of drunk driving-related deaths relative to their low populations.

Nevertheless, despite the disparity between various regions in the seriousness of their drunk driving issues, the general trend across the nation is one of a reduction in the tendency of people to drive while intoxicated, and this is reflected in a wide range of statistics. Let’s hope this trend continues for the foreseeable future.